Two Years in the Forbidden City 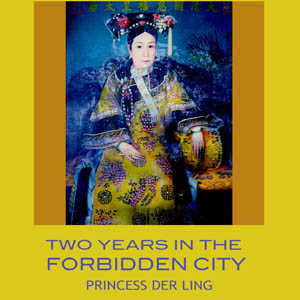 Two Years in the Forbidden City

This is a LibriVox recording of Two Years in the Forbidden City, by Princess Der Ling. Recording by Jc Guan.

THE author of the following narrative has peculiar qualifications for her task. She is a daughter of Lord Yu Keng, a member of the Manchu White Banner Corps, and one of the most advanced and progressive Chinese officials of his generation. she became First Lady-in-Waiting to the Empress Dowager, and while serving at the Court in that capacity she received the impressions which provide the subject-matter of this book. Her opportunity to observe and estimate the characteristics of the remarkable woman who ruled China for so long was unique, and her narrative throws a new light on one of the most extraordinary personalities of modern times. Yielding to the urgent solicitation of friends, she consented to put some of her experiences into literary form, and the following chronicle, in which the most famous of Chinese women, the customs and atmosphere of her Court are portrayed by an intimate of the same race, is a result. (Summary adapted from the Foreword)

For more information, or to volunteer, please visit librivox.org.

Reviewer: ListeninginChicago - favoritefavoritefavoritefavorite - January 9, 2010
Subject: Very interesting insight into the Qing dynasty
The Empress Dowager Cixi wielded power of the Qing dynasty in its final years. This is a very interesting first hand look at the life of the Empress and her court. In a way, I wish that I had listened to this before visiting the Forbidden City and the Summer Palace, but I look forward to returning to Beijing again someday and seeing these sites through Princess Der Ling's eyes.

The book is very well read by JC Guan.

Beautifully read first person account of a French-educated Chinese woman at the court of the Chinese dowager empress in 1905. The reader's accent is appropriate to the work and it's easy to imagine that she really is the Princess! I was entirely captivated by this autobiographical account of modern sensibility and ancient tradition.

Thank you JC. This must have been a HUGE amount of work to record and edit. Suffice to say it was time well spent.

Uploaded by librivoxbooks on February 28, 2009